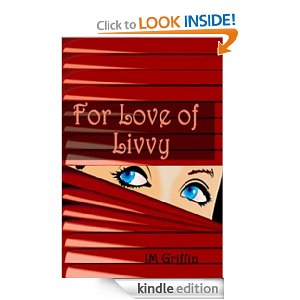 THIS WAS ANOTHER FUN MYSTERY THAT HAD A LOT OF ROMANTIC OVERTONES AS WELL.  IT KIND OF REMINDED ME OF SUE GRAFTON’S ALPHABET SERIES.  VINNIE IS NOT A MEMBER OF LAW ENFORCEMENT BUT CLOSE ENOUGH TO BECOME ENTANGLED IN HER OWN INVESTIGATION.  SHE IS ALWAYS ENCOUNTERING MISHAPS LIKE HAVING HER CAR TORCHED.  SHE HAS A PARTNER IN CRIME AS WELL AS TWO QUITE MACHO MEN TRYING TO DO THEIR BEST TO PROTECT HER.

After her favorite aunt is found dead and an alarming box is mysteriously left on the doorstep of her aunt’s house now legally hers, Lavinia Esposito wants explanations. But, having cleared the package of explosives, the local cops are dumbfounded by the precious stones which came without an explanation, just an address, her Aunt Livvy’s. Frustrated by the cops’ refusal to share their theories, criminal justice instructor Lavinia Esposito, a.k.a. Vinnie, takes investigation matters into her own hands. Vinnie is soon dragged into situations beyond her control, finding herself in hot water with the law, the crooks, and her Italian father. Willing to put her life at risk to find out what really happened to her beloved Aunt Livvy, and why jewels would be addressed to her aunt, Vinnie plunges ahead with her usual tenacity, bravery, and keen wits to solve and survive this mystery. 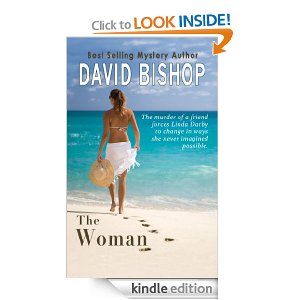 A FUN MURDER MYSTERY WITH LOTS OF ACTION AND TWISTS OF PLOT.  A WOMAN ON THE RUN WHO MUST KILL A MAN TO SAVE HERSELF AND TRIES, IN VAIN, TO SHAKE THE TAIL OF ANOTHER MAN WHO ENDS UP TO BE HER SAVIOR.

ANOTHER FREE BOOK AT BOOKBUB

* #1 BEST SELLING MYSTERY AMAZON eBOOK (MARCH 2012)
* MANY MONTHS ON THE AMAZON LIST OF BEST-SELLING MYSTERY SERIES There are approximately one-hundred-and-sixty million women living in America. This is a story of just one woman. As the story unfolds Linda gradually learns that some people do deserve to die, but that she is not one of those people.
Linda Darby is a seven-year divorcee, living quietly in a small let-the-world-go-by beach town on the coast of Oregon, who day trades for a living. Her only close friend is a widowed elderly woman who manages a small consulting company, which, as is later discovered, never has visitors, sends and receives its business correspondence only by courier, and is not listed in any phone directory. No one in town knows what kind of consulting the company does, but the rumor is that whatever they do is done for the government.
Linda doesn’t date local men. When her celibacy grows intolerable, she visits nearby towns to frequent the watering holes of successful men. Her motto: No relationships. No second dates. No use of her real name during one-night stands.
Then one evening, Linda goes for a walk and nothing for her is ever the same. She is dragged into an alley by two men, but saved by a third, a stranger who disappears as suddenly as he appeared. The next day she finds out the two men in the alley had been killed, the town’s first murders ever. The following day she learns that hours before she had been dragged into the alley, her close friend was tortured and killed. The next night, she awakens several hours after going to bed to find a man sitting in her bedroom, watching her.
In the days that follow, events stretching all the way to the nation’s capital change who Linda is, what she thinks, and how she will live the rest of her life. 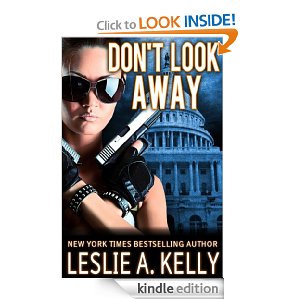 THIS IS A PAGE TURNER!  WRITTEN IN THE FUTURE BUT NOT SO FAR IN THE FUTURE THAT THINGS ARE TOO DIFFERENT.  10/20/17  BECOMES A NEW DAY OF TERRORISM – DESTROYING THE WHITE HOUSE AND KILLING THE PRESIDENT!  NEARLY 5 YEARS LATER, THE WHITE HOUSE IS REBUILT AND A CEREMONY IS HELD WHILE THE WOMAN WHO ORGANIZED THE EVENT IS BEING SLOWLY TORTURED AND KILLED IN THE BASEMENT.  SHE IS NOT THE ONLY VICTIM NOR IS HE THE ONLY KILLER.  LOVED IT!  WILL DEFINITELY HAVE TO LOOK FOR THE SECOND BOOK!

Veronica Sloan, a strong, determined D.C. detective, faces the case of her life when a murder is committed in the White House basement. The victim was a participant in a top-secret experiment, and it’s time for Ronnie and FBI agent Jeremy Sykes to find out if a recording device implanted in a victim’s head can help solve her murder….before the killer strikes again.

And watch for DON’T EVER STOP — the second book in this frightening new series! 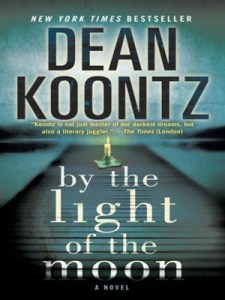 DON’T GET ME WRONG, I DID THOROUGHLY ENJOY THIS BOOK BUT DEAN IS GETTING A BIT WAY OUT THERE WITH SOME OF HIS WRITING.  I LIKE A BOOK THAT HAS SOME POSSIBILITY OF ACTUALLY HAPPENING AND MAKE ME THINK OMG “WHAT IF?”.  THIS BOOK DIDN’T DO THAT FOR ME BUT IT WAS ENTERTAINING TO READ.

Dean Koontz has surpassed his longtime reputation as “America’s most popular suspense novelist”(Rolling Stone) to become one of the most celebrated and successful writers of our time. Reviewers hail his boundless originality, his art, his unparalleled ability to create highly textured, riveting drama, at once viscerally familiar and utterly unique.

Author of one #1 New York Times bestseller after another, Koontz is at the pinnacle of his powers, spinning mysteries and miracles, enthralling tales that speak directly to today’s readers, balm for the heart and fire for the mind. In this stunning new novel, he delivers a tour de force of dark suspense and brilliant revelation that has all the Koontz trademarks: adventure, chills, riddles, humor, heartbreak, an unforgettable cast of characters, and a climax that will leave you clamoring for more.

Dylan O’Connor is a gifted young artist just trying to do the right thing in life. He’s on his way to an arts festival in Santa Fe when he stops to get a room for himself and his twenty-year-old autistic brother, Shep. But in a nightmarish instant, Dylan is attacked by a mysterious “doctor,” injected with a strange substance, and told that he is now a carrier of something that will either kill him…or transform his life in the most remarkable way. Then he is told that he must flee–before the doctor’s enemies hunt him down for the secret circulating through his body. No one can help him, the doctor says, not even the police.

Stunned, disbelieving, Dylan is turned loose to run for his life…and straight into an adventure that will turn the next twenty-four hours into an odyssey of terror, mystery–and wondrous discovery. It is a journey that begins when Dylan and Shep’s path intersects with that of Jillian Jackson. Before that evening Jilly was a beautiful comedian whose biggest worry was whether she would ever find a decent man. Now she too is a carrier. And even as Dylan tries to convince her that they’ll be safer sticking together, cold-eyed men in a threatening pack of black Suburbans approach, only seconds before Jilly’s classic Coupe DeVille explodes into thin air.

Now the three are on the run together, but with no idea whom they’re running from–or why. Meanwhile Shep has begun exhibiting increasingly disturbing behavior. And whatever it is that’s coursing through their bodies seems to have plunged them into one waking nightmare after another. Seized by sinister premonitions, they find themselves inexplicably drawn to crime scenes–just minutes before the crimes take place.

What this unfathomable power is, how they can use it to stop the evil erupting all around them, and why they have been chosen are only parts of a puzzle that reaches back into the tragic past and the dark secrets they all share: secrets of madness, pain, and untimely death. Perhaps the answer lies in the eerie, enigmatic messages that Shep, with precious time running out, begins to repeat, about an entity who does his work “by the light of the moon.”

By the Light of the Moon is a novel of heart-stopping suspense and transcendent beauty, of how evil can destroy us and love can redeem us–a masterwork of the imagination in which the surprises come page after page and the spell of sublime storytelling triumphs throughout. 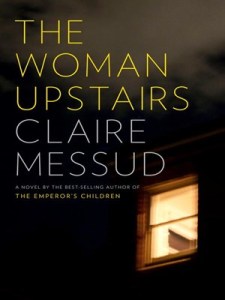 I DID NOT EXPECT THIS TALE OF LOVE AND HATE!  YET I EXPERIENCED IT AND ENJOYED IT FROM START TO FINISH.  NORA DEFINITELY GRABS YOU WITH HER LOVE FOR HER STUDENT, REZA.  THEN SHE FALLS IN LOVE WITH SERENA AND HER HUSBAND, SKANDAR.  SEE HOW IT ALL UNFOLDS!

From the New York Times best-selling author of The Emperor’s Children, a masterly new novel: the riveting confession of a woman awakened, transformed and betrayed by a desire for a world beyond her own.

Nora Eldridge, an elementary school teacher in Cambridge, Massachusetts, long ago compromised her dream to be a successful artist, mother and lover. She has instead become the “woman upstairs,” a reliable friend and neighbor always on the fringe of others’ achievements. Then into her life arrives the glamorous and cosmopolitan Shahids–her new student Reza Shahid, a child who enchants as if from a fairy tale, and his parents: Skandar, a dashing Lebanese professor who has come to Boston for a fellowship at Harvard, and Sirena, an effortlessly alluring Italian artist.

When Reza is attacked by schoolyard bullies, Nora is drawn deep into the complex world of the Shahid family; she finds herself falling in love with them, separately and together. Nora’s happiness explodes her boundaries, and she discovers in herself an unprecedented ferocity–one that puts her beliefs and her sense of self at stake.

Told with urgency, intimacy and piercing emotion, this brilliant novel of passion and artistic fulfillment explores the intensity, thrill–and the devastating cost–of embracing an authentic life. 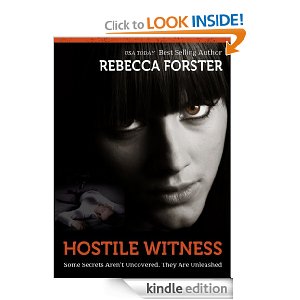 THIS IS A GREAT THRILLER THAT IS A PAGE TURNER.  I GOT IT FREE AT BOOKBUB AND WAS ONCE AGAIN PLEASANTLY SURPRISED BY THE QUALITY OF THE BOOK.  EXCELLENT PLOT WITH LOADS OF TWISTS AND TURNS!  THERE ARE MORE IN “THE WITNESS” SERIES SO I MAY TRY ANOTHER!

IF YOU HAVEN’T JOINED BOOKBUB YET, YOU SHOULD – IT’S FREE AND I’VE FOUND EVEN THE FREE BOOKS ARE QUALITY, GOOD READS!

Uncovering the truth proves lethal in this mystery from a USA Today bestselling author. Attorney Josie pledges to help a friend whose daughter is accused of murder. But she doesn’t know if the truth will save the girl… or implicate her. Over 300 five-star ratings on Goodreads

When sixteen-year-old Hannah Sheraton is arrested for the murder of her stepgrandfather, the chief justice of the California Supreme court, her distraught mother turns to her old college roommate, Josie Baylor-Bates, for help. Josie, once a hot-shot criminal defense attorney, left the fast track behind for a small practice in Hermosa Beach, California. But Hannah Sheraton intrigues her and, when the girl is charged as an adult, Josie cannot turn her back. But the deeper she digs the more Josie realizes that politics, the law and family relationships create a combustible and dangerous situation. When the horrible truth is uncovered it can save Hannah Sheraton or destroy them both.